RCI affiliate Malin Pinsky published a new article titled Throwing back the big ones saves a fishery from hot water in the Proceedings of the National Academies of Science, exploring the sensitivity of lobsters to temperature changes off the coast of Maine. This region has the strongest temperature gradient in the world, causing problems for species that are sensitive to changes in temperature when the region warms up.

New Jersey Governor Phil Murphy signed a bill into law requiring the state to join the U.S. Climate Alliance. The US Climate Alliance is comprised of 15 states and Puerto Rico, and represents a commitment to enact policies to reduce greenhouse gas emissions by 26% below 2005 levels by 2025.

Crumbling infrastructure and limited public funding across the US have led to the enlistment of private companies to handle water systems, causing increases in cost without an improvement to services. Additionally, in many large cities, levels of lead have risen to concentrations harmful to human health. According to RCI affiliate Daniel Van Abs, its not clear if higher costs are due to improvements in service or due to overbuilding infrastructure tha

RCI co-director Anthony Broccoli is a co-author of a study that determined that extra tropical cyclones generate most of the large storm surges in the northeast, as reported in  Rutgers Today. Rutgers Greenberg Fellow, graduate student Arielle Catalano was the first author on the work which found that the biggest surges developed when slow moving extratropical cyclones encounter high pressure, leading to a tight pressure gradient and longer-lasting onshore winds.

Congratulations to RCI affiliate Paul Falkowski, one of the two recipients awarded the 2018 Tyler Prize for Environmental Achievement for his contributions to fighting climate change through increasing scientific understanding of how Earth’s climate works. Falkowski has published numerous papers on the role played by microbes in shaping Earth’s global climate cycle.

The risk of flooding will increase in the future to climate change, and threats to 1400 chemical facilities near waterways will become far greater according to the NY Times. Federal law does not explicitly require sites in floodplains handling toxic chemicals to take extra precautions against flooding, but as RCI affiliate Jeanne Herb points out, more often than not, sites with hazardous chemicals are nearby a body of water.

New findings published in PNAS, which include RCI affiliate Paul Falkowski among other Rutgers scientists found four chemical structures that make up the proteins inside every living organism, dubbed the ‘legos of life’. The study’s findings could lead to applications in biomedical engineering or the development of catalysts for industrial and energy use.

New Jersey Governor Phil Murphy signed an executive order mandating the NJDEP and state Board of Public Utilities  reenter the state into the Regional Greenhouse Gas Initiative (RGGI); the regional carbon cap and trade program of which New Jersey had been a charter member until its withdrawal in 2011.  RCI affiliate Jeanne Herb and Associate Director, Marjorie Kaplan are quoted in ThinkProgress.

Volcanic eruptions are an excellent analog for geoengineering efforts, which could be employed to offset global warming as noted in the NY Times, which reports on planning by NASA for a rapid response program to study volcanic eruptions. RCI affiliate Alan Robock discusses the parallels and the importance of understanding the climatic effect of volcanic eruptions.

Congratulations to RCI affiliate Daniel Van Abs, whose research was referenced in the final report of the Joint Legislative Task Force on Drinking Water Infrastructure, which was approved on January 8, 2018. The task force was charged with studying and making recommendations concerning issues related to drinking water infrastructure in New Jersey, and identifying both short-term and long-term solutions to address the quality and condition of drinking water infrastructure in the State.

Falkowski is a distinguished professor in the Departments of Marine and Coastal Sciences and Earth and Planetary Sciences.  His scholarship focuses  on phytoplankton, coral, and the primary production of aquatic organisms for his studies on the biophysical processes controlling ocean productivity, in the roles of the nitrogen and iron cycles in ocean biogeochemistry and climate. The knowledge that climate strongly influences the distribution and diversity of all animals and plants has been historically clear, but its effects on microbial communities were poorly understood.  In the 1970s, Dr. Falkowski was among the first  scientists to observe this chain of link processes at the source of all life's origins - our oceans- that now informs predictions about how phytoplankton communities will change in the future and impact global climate. He has authored over 300 scientific papers, edited and authored 6 books and advised more than 100 graduate student, postdoctoral fellows, and visiting scientists. Dr. Falkowski is the Bennett L. Smith Chair in Business and Natural Resources and the founding director of the Rutgers Energy Institute. 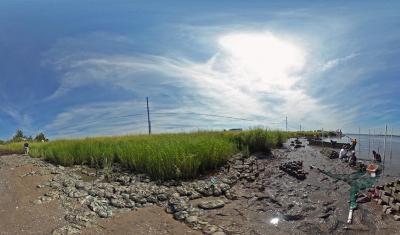 Explore farm and forestry climate adaptation practices from throughout the Northeast through these 360 degree demonstration projects including.
In one, Rutgers University scientists, RCI Affiliate Dave Bushek and Rutgers Program Coordinator, Jenny Paterno Shinn, both of the Haskin Shellfish Lab, assist partners from US Fish and Wildlife Service, The Nature Conservancy and Partnership for the Delaware Estuary  to build living shorelines  along the Delaware Bayshore to reduce the impacts of future storms.

RCI affiliate, Professor  Debashish Bhattacharya of the Department of Biochemistry and Microbiology has been appointed by the National Academies of Sciences, Engineering, and Medicine to serve on the committee to discuss and report on strategic Interventions to Increase the Resilience of Coral Reefs (http://dels.nas.edu/Study-In-Progress/Interventions-Increase-Resilience/DELS-OSB-17-01). Prof. Bhattacharya’s lab studies coral genome evolution, population structure, and coral responses to abiotic stress, with the goal of identifying the ‘genetic toolkit’ used by these species to adapt to environmental fluctuations.
This committee has multiple tasks. These include to review the state of the art in ecological and genetic interventions that can be used to enhance recovery and persistence of coral reefs. The committee will consider scenarios and solutions that address the next 5-20 years which will see serious deterioration in the reef environment due to warming, more acidic waters. The committee will provide an environmental risk assessment and develop a decision pathway for implementation of potential interventions that includes knowledge gained from genetic, genomic, and ecological data. Two reports will result from this initiative.