News and Highlights in March 2020

The New Jersey Department of Environmental Protection announced enhanced pollution controls on 600 miles of New Jersey rivers and streams, designed to limit pollution and sewage discharges. In addition to preserving water quality, the designation also creates 300-foot development buffers along the ranks of rivers. Sandra Meola, director of the Coalition for the Delaware River Watershed, acknowledged that New Jersey’s action was critical for the protection of regional water supplies from overdevelopment, climate change, and polluted runoff.

Rutgers hosted the World Food Prize New Jersey Youth Institute on March 6th, where high school students learn about critical global issues and explore ways to make a difference in New Jersey and around the world. RCI affiliate and Associate Dean Xenia Morin was among the faculty overseeing the day-long program and judging student research presentations on how to solve key global challenges.

It may be necessary for the state of New Jersey to use its eminent domain powers to purchase vulnerable homes along the Jersey shore, reports NJ Spotlight. According to the NY Times, the federal government is pressuring states into using eminent domain in order to have a chance at federal money for combating climate change.

A new study in Science finds that disruptions in the northward transport of heat in the North Atlantic have occurred more frequently than previously thought during warm interglacial periods over the last 450,000 years, reports Rutgers Today and Science Daily. According to co-author and RCI affiliate Yair Rosenthal, these findings suggest that our climate system is “poised near a tipping point for abrupt disruptions.” The resulting disruption could cause cooling in the North Atlantic and Europe while the rest of the Earth warms.

More solar energy capacity was installed in New Jersey in 2019 compared to any previous year, reports NJ Spotlight, increasing solar energy’s share of the state’s energy needs to 5%.  This was in part due to a push to finish projects before lucrative incentives under the old system expired at the end of the year. To maintain sustainable solar sector growth, the state is currently working to develop a new solar incentive structure to maintain sustainable solar sector growth.

The New Jersey Board of Public Utilities (BPU) is soliciting written comments through April 13th on a straw proposal to incentivize gas and electric utility companies to cut energy use, reports NJ Spotlight. The proposal puts forward a framework for a statewide energy efficiency program that would create incentives for achieving reductions in customers’ energy use.

Rutgers researchers at the Jacques Cousteau National Estuarine Research Reserve who work at the Rutgers University Marine Field Station in Tuckerton, NJ have decided to start planning for moving to higher ground as they are faced with the threat of rising sea levels, reports NJ Spotlight. According to RCI affiliate Lisa Auermuller, assistant manager of the reserve, this is an opportunity for scientists who study sea level rise to lead by example when directly confronted by it.

RCI co-director Anthony Broccoli discusses climate change in South Jersey among other things in an interview with Joe Martucci of the Press of Atlantic City.

A New Jersey resident is fighting back against sea level rise, reports Yale Climate Connections. By organizing with a group of her neighbors in her home town of Ocean City, NJ, her group has pressured the city to act through investing $25 million for stormwater reconstruction projects and another $25 million over the next five years for additional stormwater projects.

According to new research published by Rutgers scientists, climate change could threaten sea snails in the mid Atlantic that commercial fishermen are interested in, reports Phys.org and Eureka Alert. According to study co-author and RCI affiliate Daphne Munroe, these whelk snails are resilient to temperature change, but in warmer temperatures they will produce less offspring.

More than 1.2 billion people could be impacted by heat stress by 2100 without reductions in carbon emissions, according to new research co-authored by RCI affiliate Robert Kopp, reports Science Daily, ZME Science, and Futurity. The work focuses on a measure of heat stress accounting for temperature, humidity, wind speed, and solar radiation and finds a potential 4x increase in the amount of people impacted by dangerous heat stress conditions.

New Jersey experienced its 6th mildest and 4th least snowiest winter on record according to a report by NJ State Climatologist and RCI affiliate David Robinson, reports NorthJersey.com. According to Robinson, New Jersey’s winter was more like what would be typical in Virginia. Globally, December and January were the warmest on record, consistent with the long-term global warming trend as a result of anthropogenic emissions of carbon dioxide.

Rutgers University is joining the University Climate Change coalition (UC3), a coalition of 22 universities seeking to minimize the effects of climate change, reports Rutgers Today and the Daily Targum. Joining UC3 allows Rutgers to share in an exchange of best practices, sharing knowledge and experience with fellow coalition members.

The New Jersey Department of Environmental Protection has completed the public comment phase of adopting new land-use rules to help the state adapt to climate change, reports NJ Spotlight. Underpinning the need for new rules is the latest sea-level rise forecast in a recent report from the Rutgers Climate Institute, finding the Jersey Shore may experience sea level rise to 2.1 feet by 2050. The rules are to be written this spring and adopted within a year.

In an Op-ed on NorthJersey.com, United States Senator Cory Booker (NJ-D) proposes the Climate Stewardship Act, which aims to include nature-based methods in solutions to reduce the damage from climate change, especially for New Jersey’s vulnerable communities. The new legislation would make investments to restore ecosystems like wetlands and forests, including the restoration of 2 million acres of wetlands nationally by 2030 and planting 400 million trees  by 2050 in cities across America.

RCI affiliate Ken Miller spoke at Montclair University about the impact of rising sea level on New Jersey and the rest of the globe on February 25th, reports the Montclarion and the Daily Targum. According to findings from when Miller was part of the International Ocean Discovery Program, sea level is rising at a rate of 3 millimeters per year, with damaging implications for coastal cities and especially the Jersey Shore. 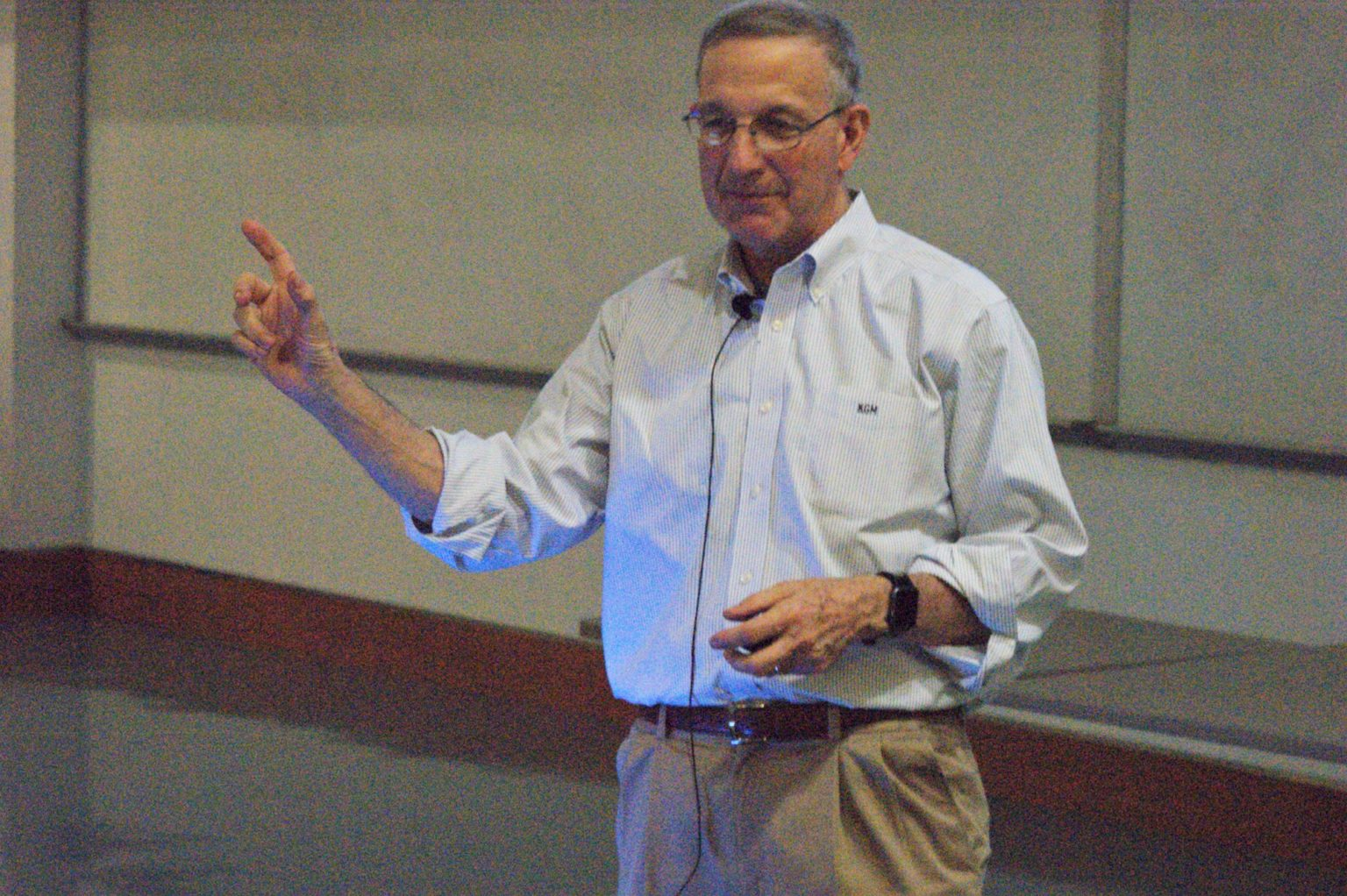 Professor Kenneth Miller from Rutgers University lectures on the rising of sea levels. Photo credit to Adrianna Caraballo of The Montclarion.

Ocean temperatures continue to warm, leaving fishing quotas outdated and frustrating fishermen who must now travel farther distances to catch fish, reports Bloomberg. According to research by RCI affiliate Malin Pinsky, the Atlantic coast is warming rapidly compared to the rest of the world, causing relatively rapid northward shifts in the distribution of fish.

A panel of experts spoke at Rutgers on February 25th to discuss the intersection of migration and  climate change, and how a Green New Deal could address both issues, reports The Daily Targum. The discussion was moderated by Naomi Klein and participants were Maxine Burkett, Saket Soni, Maria Alegria Rodriguez, and Patrice Lawrence.